The building is positioned on an exposed lot directly at the motorway 5 and asserts the new quarter Gateway Gardens. The building takes references to the nearby airport, the Frankfurt skyline and the mountains of the Taunus and conveys them with it's three different parts that vary in height and orientation.

Three buckled wings circle around the building core. It is possible to combine two or three of the 400–500 m² large units at the same level with the interconnecting areas as well as to combine units on different floors independently from the core. The size of each unit allows for different floor plans such as cubicles, bullpens and business lounges.

The building is structured horizontally by the alternation of ribbon windows and breast walls. The latter are tilted corresponding to the course of the sun and carry PV-modules. The facade construction is designed with many prefabricated components and a high percentage of rivisionable parts. Thus it is possible to erect the building in little time and makes maintenance and cleaning easier. The building will be equipped with a facade maintenance unit.

The facade is designed in such a way that it blocks insolation during summer and allows it during winter. Thus less energy for both cooling and heating is necessary. In order to achieve this goal the facade construction with breast walls and sun screens changes due to the cardinal direction. The breast walls that point towards south cantilever a lot thus blocking insolation almost entirely whereas the the cantilevering is reduced towards east and west and almost inexistant towards north. The focus was also on an excellent light transmittance of the facade that reduces the need for artificial light to a minimum. Aditionally the double-skin facade offers high noise and thermal insulation.

The breast walls are broadly equiped with integrated extensive PV-panels. The density of the panels is lower towards north than towards the other directions. The annual energy yield of this installation covers the energy requirements of the building. The energy storage leads to a high percentage of self consumption and reduces the load in the public grid. The storage is able to preserve the maximal energy yield of one day in spring or autumn. Special agreements with the electricity provider allow the direct use of the energy by the users of the building. The windows are opened and closed by machines. This not only renders it more convenient for the user but also reduces the energy demand for the air conditioning. In case of a lower outside temperature free cooling of the heat exchangers (hybrid dry coolers on the rooftop) provides coldness for the air conditioning. In the night the openable windows allow for free cooling of the whole building. 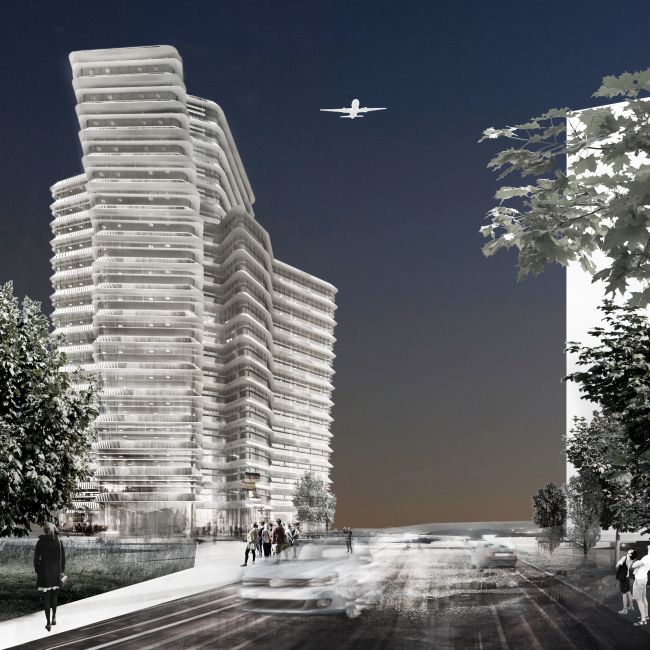 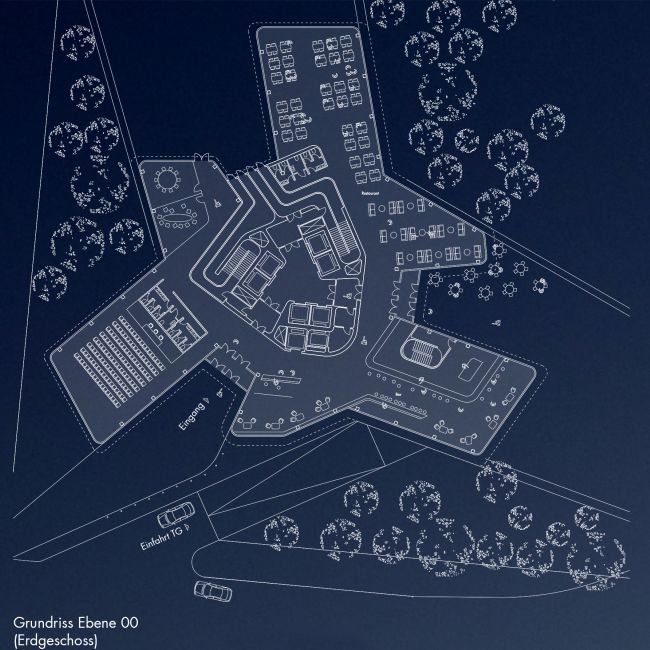 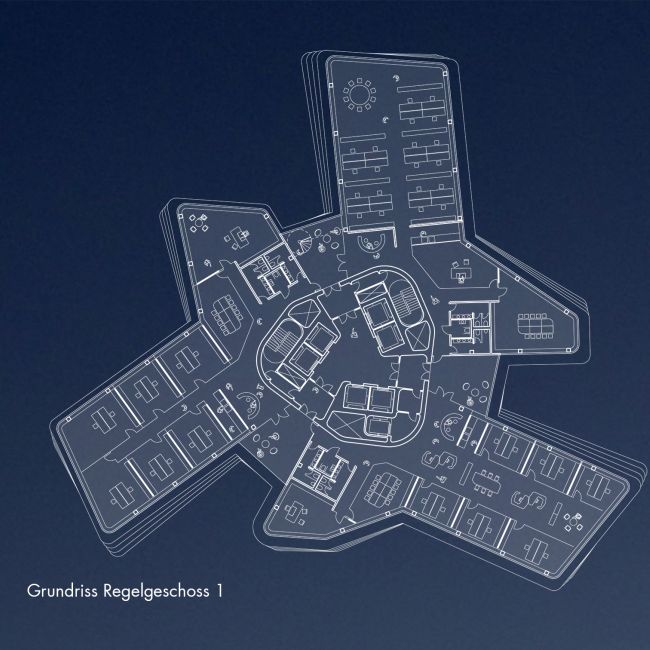 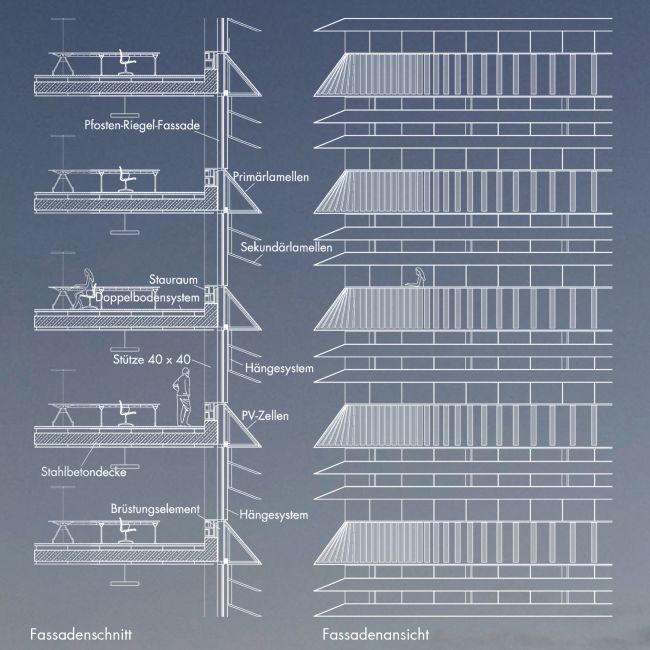 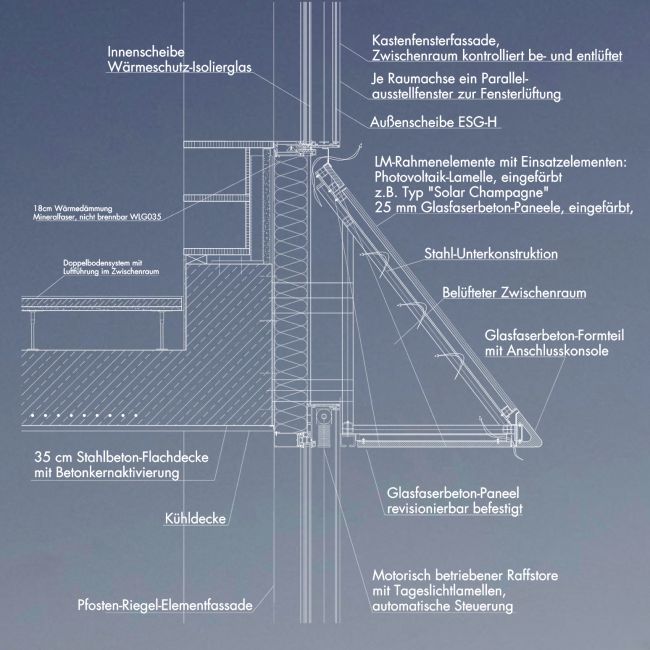 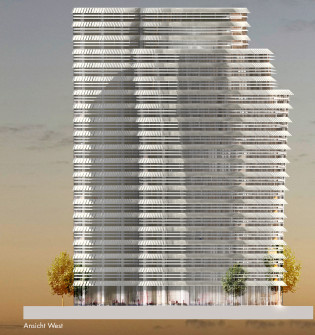 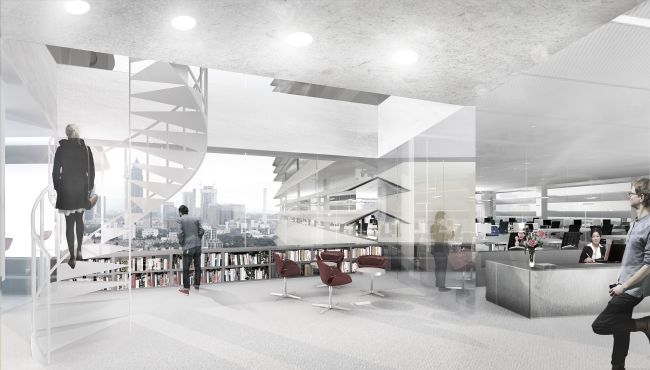