The underlying idea was to create a structure that appears iconic and sculptural seen from a long distance and light and filigree if viewed from up close. Those apparently contrary issues are brought together by the two main elements: the ski jump and the windshields.

Whereas the ski jump is formed by two cantilevering, massive concrete walls, the windshields are formed by porous and folded concrete plates. As they are of the same material they appear from distance as an unity. However on site the porosity and geometry of folding gives the structure a light appearance.
The primary structural module is formed by two cantilevering concrete walls. They are sewn together by plugged-in concrete plates and combined with the bracing system under the inrun. Thus they form a tubular system. This cantilevering ski jump is coupled with the structural body of the underground spaces to a flexurally rigid system. The so combined mass-active structural system is able to guide the bending moments of the cantilever by an equilibrium of compression and tension forces into the ground. In contrast to that the windshields add geometrical stiffness by folding. Together with the porosity the windshields act as form-active shapes. The flexibility of folded systems allows the designers in the planning phase to trim the form-active shapes to the aerodynamic conditions on site.
The support structure combines proven construction methods with innovative material technologies and computational manufacturing processes and thus provides at the same time spectacular architecture and a very economic solution. 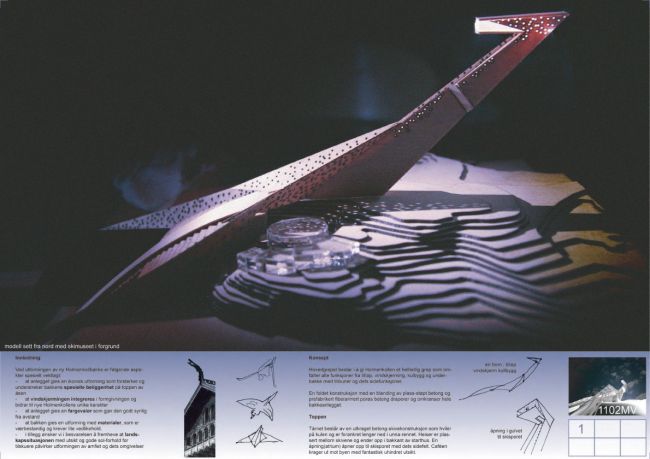