The draft for the Skywalk proposes a light and dynamic spiral bridge that answers to the context as 'visual centre' of the massive arches nex to it. The supporting structure is designed as contrast to the constructional logic of arched systems. However an technoid appearance of the structural relations has been avoided. On the contrary the Skywalk is a medium for commucation.
The design concept for the bridge is based on a spatially closed, sculpural form, that is made of a cylindrical, 'infinite' spiral and and closed circles. This combination of spirals and circles forms a tube-like supporting structure. The actual track is integrated in this tube. By adjusting the variation of the array and its density of the structure, the Skywalk in the environment. Regarding geometry the spirals the spirals are in the lateral surface of the tube and follow the main tension trajectories of a beam. The profile of the tube is steady, whereas the compression of the spirals and thus a more dense structure are adjusted to the transverse forces. The load of the bridge is carried by support rings and steeper spirals that lead to the foundations. The load bearing spirals are conducted consciously in order to allow or prevent certain views.

Due to the lightweight construction large sections of the Skywalk can be premounted at the factory and the bridge be assembled in the proximity of the building site. Thus completely assembled, the main part can be lifted onto the already built foundations with mobile cranes without any interference with the traffic. The bridge is designed with a cladding made of ETFE-foil and coated polyester fabric, that allow different amounts of translucency and transparancy. The cladding is supposed to be spanned segment by segment between the spiral tubes. They are used in a way that supports the appearance of the spiral but at the same time produce a hierarchy of visual connections to the environment. 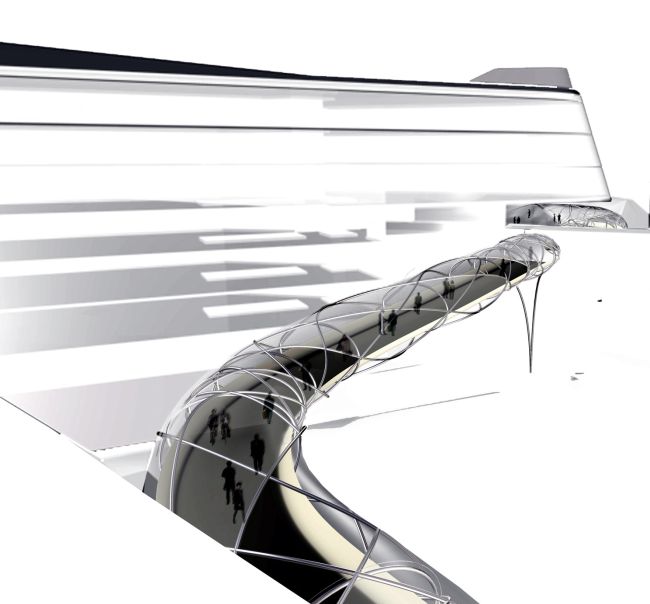